Dramamine Bagel and the American Dream 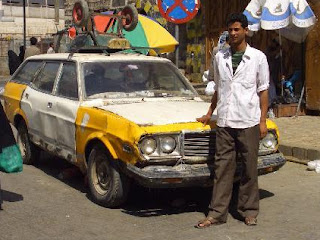 I never know what to expect when I step into the back of a taxicab. I am literally rolling the dice on whether the cabbie will be talking on the phone in some foreign language for the duration of the ride, whether or not I get to smell the native food dishes that have been consumed in the car, and whether or not I would regret my decision of not putting on a motorcycle helmet prior to getting in the vehicle.
I was recently traveling to Dallas, TX to speak at a sales convention. It just so happened that the New York Giants and the Dallas Cowboys were playing on the day of my arrival. It also so happened that the Texas Rangers were in the playoffs and would soon to be going to the World Series. Why is this factor important? All of the rental cars were at least $250 due to the increased demand. While I typically love having a rental car when I’m in a city, I couldn’t justify the expense to my meeting planner. I decided that I could just take a taxicab to meet all of my transportation needs while I was in the Lone Star State. This journey will provide you will several key tips that will help you not only grow your business, but will help you build a solid base of return customers.
As I deplaned, I grabbed a bagel from one of the airport delis. As much as I don’t like to eat on the run, I also am very aware of what happens to my mental acuity when my stomach is empty. With my briefcase slung across one shoulder, garment bag across the other, and my bagel in hand, I stepped out into the warm Texas morning.
I hired the first cab that came across my path and climbed into the dilapidated minivan for my 20 minute journey to my client’s office. After I gave the driver the address for my destination, he promptly took off out of the airport. After about one mile (as we were weaving in and out of traffic) he began to enter the destination on his phone to get the directions needed. We were now traveling down the freeway at 80 miles per hour in a minivan which smelled like bad Indian take-out food, and I had a driver who happened to rationalize texting on his phone while my life was in his hands.
This driver was so jerky in his driving habits that I began to feel like I had just gotten off of a roller coaster. I will spare you the gory details about how he got lost three times while en route to my destination which was only supposed to be 21 minutes from the airport with traffic. As he deposited me at my destination (only 58 minutes later!) He tried to ask for $70 cab fare. I am a fairly generous person, but I am not stupid. I retrieved my bags and settled the fare (much less than $70) with him and went on with my meetings for the morning.  Needless to say, I would not recommend him.
I phoned Carrollton Taxi upon the conclusion of my meeting, and was desperately hoping for a better experience while yet another stranger transported me to my hotel. I walked outside the building and saw a luxuriously appointed Town car and driver waiting for me.
I really hoped that I didn’t mistakenly call a limo service! The driver introduced himself as Thomas and helped me with my bags. When I sat in his clean, comfortable leather seats and gave him my destination, he promptly entered the address into the navigation system (while still parked!) and told me it would be about a 20 minute ride. Thomas inquired about what brought me to Dallas, how long I had been speaking, and about my family. I reciprocated, and began to build a fantastic rapport with him. He told me that his father had just become a naturalized American Citizen only minutes prior pulling into the parking lot to pick me up! He then carried on about how great America was and how he started the company several years ago with a focus on service. Today, Carrollton Taxi has seven luxury cars and a loyal customer base of over 4,000.
This story of a man enjoying the American Dream can also impact your business in the following ways:
1. When in doubt, offer a few simple luxuries. Whether your assistant asks guests if they would like a water or coffee while waiting in your lobby, or you place a continuous focus on getting to know your clients, people are much happier when they feel well taken care of.
2. Keep things simple. I was working with a banking client recently who told me about their 5G technology approach to customer relations. They make things so simple that someone in the Fifth Grade could understand them.
3. Stay in touch! I like to make a few notes after meeting someone that makes them stand out. I will often refer back to them when I have an opportunity to talk to them again. When I called Thomas to verify a few facts for this article, he not only recalled the hotel that he dropped me off at but he also remembered a few other details. This creates customers for life!
In today’s overly cynical and competitive marketplace, you cannot leave the “little things” to chance. Those little things add up to amazing accomplishments over time. Now if you’ll excuse me, I’m going to grab a box of Dramamine, a bagel, and a motorcycle helmet. Time to call a cab and head to the airport!
For more information about booking The Shef for your next event, visit http://www.theshef.com or call our offices at 1-800-863-2591
Posted by The Shef at 11:51 AM

Email ThisBlogThis!Share to TwitterShare to FacebookShare to Pinterest
Labels: building a loyal customer base, Dallas Taxi, motivational speaker in texas, speaking in dallas